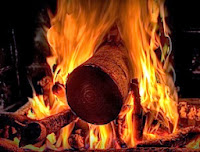 I don’t heat with wood exclusively, but I use it as a supplement to the expensive propane that heats our home.  When the temperature slides into the teens and single digits - as it has recently - I always put a fire in our woodstove.

Our Jotul stove has a glass front so I can watch the fire burn. Sometimes I also have an open fire in our Rumford fireplace to heat the old section of our home, which dates from the 1790’s.

Even though I enjoy the warmth of wood heat, the chief attraction of a fire is spiritual. It is a form of meditation. There is nothing quite like watching a fire. Therefore it is no surprise that the tradition of the Yule log fascinates me.

Basically a Yule log is a really big piece of firewood burned during the twelve days of Christmas. Originally it was so big that it took more than one person to lug it into the house.  I like this story about the origin of the Yule log, which I found on Wikipedia:

The first mention of the Yule log in Britain is a written account by the clergyman Robert Herrick, from the 1620s or 1630s. Herrick called the tradition a "Christmas log" and said that it was brought into the farmhouse by a group of males, who were then rewarded with free beer from the farmer's wife.

That ought to motivate my sons to come over some evening and watch the Yule log with me!

Watching a fire inspires spiritual reflection. It is said that every atom in our bodies was originally forged within distant stars billions of years ago. Humans are literally recycled stardust. Fire is the means that God has used to craft our physical bodies. Maybe that is why fire feels like home.

In the Scriptures fire is often associated with God, and especially the Holy Spirit. Moses saw and heard God in a burning bush.  I imagine that Moses often stared into a campfire on those nights when he was tending his flock in the wilderness. Then one time he encountered God in the fire.

When I look into a fire I also sense God. I can hear the voice that spoke to Moses, “I am who I am.” The Yule log reminds us of God’s eternal nature and our own human nature.  It reminds us of Christ, the Light of the world, whom we confess to be both human and divine. Fire-gazing can be a spiritual practice at Christmas … even without the beer.

Posted by Marshall Davis at 7:52 PM