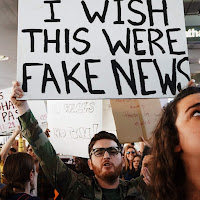 I used to enjoy watching the evening news, long before there were such things as cable television, social media, and “fake news.” I got hooked when I was a teenager, watching grainy images of Walter Cronkite with my father in the 1960’s. Later I remember watching PBS’s The MacNeil/Lehrer Report, and coming away with the confidence that I knew what was going on in the world.

Now I come away from the evening news feeling like I have been emotionally assaulted. Senseless shootings, vindictive partisan politics and mindless triviality dominate the news. Whatever is most offensive, sensational or controversial is put to the head of the show, while important stories are ignored. In recent years destructive weather is showcased first because of the dramatic images of floods, tornados, hurricanes and fires.

The antics of entertainment and sports celebrities are paraded as if they were news. They aren’t! And do networks have to repeat the same stories night after night? Can’t they come up with anything new to report? After all, it is called “news.” I am not saying that all journalism is bad. But too much of television journalism is the equivalent of junk food. Too much will make you sick.

Recently we bought a sofa, which we eventually had to return to the store. The off-gasses from materials in the furniture were damaging my health. It took a while for my physician and I to discern what was causing my physical symptoms, but as soon as I removed the furniture from the living room my health improved dramatically. My sofa was poisoning me.

I feel like the same sort of thing is happening with the evening news. It is poisoning the psyches of Americans and causing all sorts of harmful symptoms in our society. Not the least of which is fear, anxiety, xenophobia, and political polarization. Our psyches are not designed for constant bombardments of threats. These in turn prompt the desire to find security in personal arsenals of weapons and political extremism.

The worst thing about TV news is its corrosive effect on the human spirit. It is bringing out the worst in the human soul and American religion, as exemplified in the recent degradation of American Evangelicalism, which used to be my spiritual home. Spiritually speaking our nation is dying, as any study of the state of American religion will show.

There is a need for a spiritual solution. Paul wrote, “Finally, brothers and sisters, whatever is true, whatever is noble, whatever is right, whatever is pure, whatever is lovely, whatever is admirable — if anything is excellent or praiseworthy — think about such things and the God of peace will be with you.” (Philippians 4:8) Breathing such divine fresh air can counteract the toxic effect of much of American popular culture.

I am not advocating Pollyannaish optimism or hiding our heads in the sand like those who have been dubbed “snowflakes,” people too sensitive to hear anything that disagrees with their worldview.  Nor am I calling for an Amish-style withdrawal from the world so as not to be contaminated by it. Sin happens. There is no doubt about it, and we cannot hide from it or ignore it. There is great wrongdoing, suffering and injustice in the world.

I am trying to find a counterbalance to the new yellow journalism that is so pervasive these days. I am looking for an antidote to the poison, something more than the inspirational anecdote attached to the end of each evening news broadcast. I am looking for hope.

I was talking to a friend recently. In five minutes we counted five serious crises, any one of which could cripple our country – climate change, the national debt, healthcare costs, the student loan crisis, and gun violence. We could have doubled that number of crises if we had another five minutes. The world we are leaving our grandkids looks bleak.

That’s the way it is, as Cronkite used to say. We do not seem to have the national will, unity or courage to address these impending crises. Or maybe that is just the poison talking. Maybe it is not as bad as I think. Maybe I have been watching too much television news. Maybe this next election will change things. There is always a next election.

In any case I am lessening my intake of television news and relying more on a diet of print media from reputable sources that look beyond the headlines. I will supplement it with a generous dose of spiritual optimism to put it all in perspective. For as the Scripture says, “All things work together for good to those who love God, who are called according to God’s purpose.”
Posted by Marshall Davis at 9:03 AM