Cousin to a Porcupine 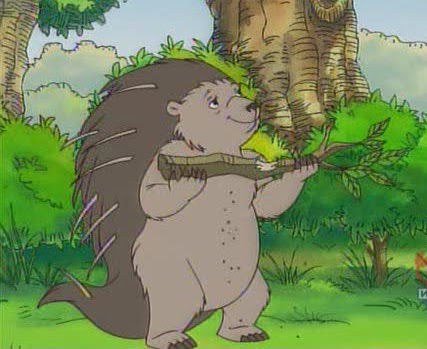 One of the consequences of being a grandfather is that I get to watch children’s television again. It has changed since my kids were little. Furthermore my grandkids are only allowed to watch TV in small doses, so we choose our shows very carefully.

Recently I sat down with our three year old to watch Little Bear. It is a very cute show. This particular episode was about a lonely little porcupine who wanted friends. Actually he wanted cousins. He asked the little bear and duck to be his cousins. Then he asked them for a hug, but bear and duck thought he was a bit too prickly to embrace.

At that point I drifted off into my own mental world. I thought, “Well, bear and duck are porcupine’s cousins aren’t they? Come to think of it, I am a cousin to porcupine as well.” I decided to do a little research as to how close of cousins we are.

Human beings share 99% of our DNA with other humans. We truly are all brothers and sisters. On a National Geographic website, I learned that we share 90% of our genes with chimpanzees (I thought it was closer to 97 or 98%),  88% with a mouse, 65% with a chicken, 47% with a fruit fly, 24% with a wine grape, and 18% with baker’s yeast. We are cousins to all living things on this planet.

It led me to contemplate the interconnectedness of life on this planet. I have always been environmentally-minded. It is one of the few issues that influence my voting. I tend not to be political,  but I am environmental. This brings it to a whole different level.

Not only are we connected biologically, we are connected chemically. Our bodies are made of the rocks of this planet, processed by erosion and biological digestion. We have literally emerged from the earth. The earth has emerged from the stars. Every element on earth was forged in distant stars. As has often been said, we are literally made of stardust. When we look into the heavens on a starry night, we are viewing our heavenly cousins.

Then there is the connectedness of consciousness. This recently became real to me during our recent trip to the Florida Keys. One of the attractions we visited was the Theater of the Sea, which is a smaller and more intimate version of Sea World. When I looked into the eyes of the dolphins, I recognized a cousin to the consciousness of my own mind. The same was true with the sea lions and even the parrots. I have not stopped thinking about this experience.

We are connected at every level. I am cousin to all life and even so-called “inanimate” objects in the universe. Our ultimate connection is to the Lord of Creation, who brought all into being out of nothing and formed all living things from the dust of the earth. This adds a new meaning to the Great Commandments. To love God’s creation is to love God and to love our neighbor as ourselves.
Posted by Marshall Davis at 10:09 AM