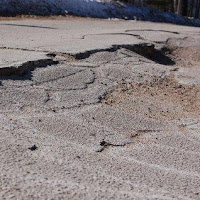 According to the calendar it is springtime. But here in the woods of New Hampshire you won’t see any jonquils or daffodils sprouting. I can’t even see the ground yet. All we see are slowly melting mounds of snow and sap buckets.

Driving the roads of rural New Hampshire in the spring is like traversing a third world country. I can drive a maximum of only twenty-five miles-per-hour on the roads near my house because of the frost heaves. Any faster and my head hits the roof and the bottom of the car hits the tarmac.

To avoid the buckles in the pavement, I will sometimes go out of my way to drive on dirt roads. They are much smoother, but they have their own hazards. As the snow melts, these backroads turn to mud. Mud season we call it, which comes right before Black Fly season and after Maple Sugaring season. They say that the Inuit have fifty words for snow. We have nearly that many for spring.

Because it is also Lent I am trying to find some spiritual significance in this. Lent is a wilderness time, patterned after Jesus’ forty day sojourn in the wilderness. The wilderness is also associated with John the Baptist who was “a voice calling in the wilderness, saying ‘Prepare the way for the Lord!’”

We are told that his ministry fulfilled the prophecy of Isaiah, who said, “I will go before you and make the rough places smooth; so that you may know that it is I, the Lord, the God of Israel, who calls you by your name.” In other words John worked on the road crew. I need John right about now.

New Hampshire roads in early spring are a spiritual discipline. They are nature’s way to slow us down. They foster mindfulness. I have to pay attention to the moment in order to navigate the moguls in the road. And during the occasional smooth stretches between the frost heaves I notice some other things – like wildlife in the woods and wetlands emerging from the ice.

Lent isn’t easy. It is not meant to be. It is the Way of the Cross. But Lent will pass. Easter is coming, and the vernal green will eventually arrive in New Hampshire. Soon I will be planting my vegetable garden and dreaming of my first dip in the lake. But for now I travel the Lenten road – grateful for the knowledge that the resurrection of life is around the corner.

Posted by Marshall Davis at 9:33 AM