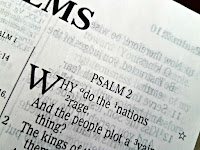 For Lent I decided to meditate on one psalm each day for forty days, using the Benedictine discipline known as Lectio Divina, which is a contemplative listening to scripture read aloud. I explored Psalm 1 on Ash Wednesday and all went well, but I was stopped in my tracks on the second day by Psalm 2.

What had I gotten myself into? How was I going to endure 38 more days of this? The second psalm has to be one of the most horrid examples of sacred writ ever writ. It is a coronation psalm recited for Israelite kings on the day they ascended the throne. It pictures the king as God’s son with absolute power over his subjects.

It is filled with threats of oppression, violence, anger, terror and wrath. The peoples under the rule of this Hebrew sovereign desire to be freed from their chains and shackles, but God scoffs at their yearning for freedom. God promises that his newly anointed ruler will “break them with a rod of iron and dash them to pieces like pottery.”

Read the psalm for yourself. I listened to it over and over again, and it did not get any better. The only redeeming part was the final verse, which is God’s command to “kiss his son.” That would be fine if applied to a nonviolent Jesus offering unconditional love, but it is not. It is talking about your typical Bronze Age monarch. Then it adds: “or he will be angry.” Sounds more like The Godfather than God.

Psalm 2 is a dreadful piece of sacred literature. Even if you interpret the psalm Christologically, it is still problematic. I tried to spiritualize it to refer to inner spiritual rebellion against God, but it didn’t work. That is clearly not what the psalmist originally meant. You can only twist scripture so much before it breaks. So I gave up, and let the psalm speak for itself.

It is an expression of human sin. It exemplifies all that is wrong with religion. It is what happens when religion wields worldly power and when political leaders act like they are God. It is Kim Jong Un, and Stalin, and Adolf Hitler. It is antichrist, not Christ. God intends for us to reject such demigods and demagoguery.

The harshness of this psalm pushed me into the arms of the merciful Messiah who was crucified by people who took this psalm literally, people who believed that religious violence in the name of God is justified. Like those who fly planes into towers. It also made me confront the violence and arrogance in my own Christian tradition and in my own heart.

In other words, the psalm accomplished its purpose. I wrestled with this sacred text until it yielded its blessing. The ancient practice of Lectio Divina worked. Scripture is meant to lead us to God, and it can do this in many ways. God can even use passages of scripture that repulse us. The second psalm was that for me. As the psalm says, “Blessed are all who take refuge in him.”

Posted by Marshall Davis at 9:15 AM