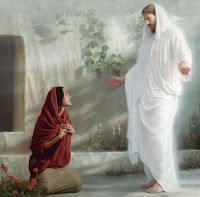 The gospel story says that when Mary Magdalene saw the risen Christ at the tomb on Easter morning that she did not recognize him. She thought he was the gardener. I have never seen a painting or drawing that captures this moment accurately. They all picture the resurrected Jesus in spotless, dazzling white apparel – like someone starring in a laundry detergent commercial.

Think about that for a moment? What gardener would wear pure white clothing to work? When I come home from a couple of hours of working in my vegetable garden I look like a Morlock. You know, one of those underground humanoid mutants in H. G. Wells “The Time Machine.” I am absolutely filthy. I immediately jump in the shower just to feel human again.

I think that is the reason that Mary did not recognize Jesus. He looked like a gardener. In other words he was dirty and sweaty. No glowing otherworldly robes. He looked like he had hung on a cross for six hours and spent the night in a cave. Maybe that is why Jesus told Mary not to touch him. He needed to get cleaned up first.

That necessitated being around dead bodies every day. That made him not only physically dirty but ritually unclean in the eyes of religious Jews. He was not welcome in the Sadducees’ temple or the Pharisees’ synagogues. Those who dealt with death were the untouchables of Jewish society.

That is why two of Jesus’ own disciples did not recognize him on the Emmaus Road later that day. He looked like a weary Passover pilgrim who had walked the dusty roads of Palestine in caravans for days to get to Jerusalem. Jesus did not look like a shining demigod, but a dirty stranger.

This slant on the Easter story fits right into Jesus’ teachings. Jesus identified with the undesirables. He said that his followers were to treat the outcasts of society as they would treat him. He mentions specifically the homeless, hungry, prisoners and “strangers,” by which he meant foreigners. You know, those people we want to keep out with a wall.

Jesus comes to us today not in the form of clean, righteous, religious people, nicely dressed for Sunday worship. He comes in the form of those too dirty to hug. Those who have traveled on dusty roads for miles. Those who have slept outdoors. The homeless and the illegal immigrants. Criminals and drug abusers and the sexually immoral. The type of riffraff that Jesus hung out with all the time during his ministry. In other words, our brothers and sisters.

When Mary finally recognizes Jesus under all the dirt, she does not hesitate to run to him and embrace him. When the two disciples on the Emmaus road invite this dusty stranger into their home and are willing to eat with him, only then are their eyes opened to recognize him. Some things never change. Jesus still comes to us in this guise. May we have eyes to recognize him and hearts to embrace him.