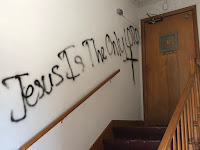 A hate crime last week in Louisville did not get the publicity of last year’s Pittsburgh synagogue shooting, which is only right since no one was physically harmed. But it was an act of hate nonetheless. It has affected me because I lived in Louisville, Kentucky, for a while.

I went to seminary in Louisville for three years in the 1970’s while getting my Master of Divinity degree and returned annually in the early 1980’s for three more years to attend classes while earning my Doctorate.

Last week someone vandalized the Hindu temple on Bardstown Road, just down the street from the church where I served as a pastoral intern. A photograph of the graffiti published in the Courier Journal caught my attention. Across the entrance to the Swaminarayan Temple were spray-painted the words: “Jesus is the only Lord” accompanied by a cross.

Elsewhere in the building the words "Jesus Is All Mighty," "Jesus Is Lord," and "God" were painted on walls, as well as numerous crosses. A picture of a Hindu deity was defaced. There was also more typical hate speech emblazoned across a bulletin board calling Hindus "foreign b*****s."

It is despicable, of course. What bothered me the most is that my religion had been hijacked. Phrases meant to be professions of faith were used as instruments of intolerance and hate. I wonder if the teenage vandal (who was caught and charged on Thursday) understands the depth of his betrayal of his Christian faith. Probably not.

He is probably as clueless as the other Kentucky teenager from a Christian school in Covington, who gained notoriety with his “smirk seen round the world” on Martin Luther King weekend. The additional videos and testimony that have surfaced since the episode at the Lincoln Memorial in Washington, DC, have helped to put the incident in a wider context, but the verdict remains the same.
But no matter how one spins the facts and or paints the MAGA teen’s adolescent motives, his facial expression and body language (as well as those of his fellow students) and his refusal to step aside for a Native American procession betray an attitude of disrespect for the religious ceremony that the Native American elder was leading.

What bothers me the most is that these young men profess to be Christians. The Louisville teen probably thought he was being zealous for the Lord by attacking a place of “idolatry” like his heroes in the Bible. The Covington youth said in his public statement that he is “a faithful Christian and practicing Catholic” and that he was actually praying while he was in the face of a Native American elder.

These are examples of a faith that has been corrupted and distorted into something base. I know nothing about the Louisville youth. The 17 year-old’s name has been withheld because he is a juvenile, but you can bet that he learned those slogans in church and Sunday School. I hope his church quickly releases a statement condemning the attack.

I hope my alma mater in Louisville also condemns the attack. I have been checking the blog site of Albert Mohler, the president of the Southern Baptist Theological Seminary, but I haven’t seen a response yet. I am not holding my breath. In a 2006 television interview on Fox’s The O'Reilly Factor (March 17), Mohler called Hinduism “a demonstration of Satanic power.”

When I did a search for “Hindu” on Mohler’s site, all that appeared was a 2010 article warning Christians not to practice yoga and a 2009 post condemning Hinduism as a “false gospel” and reminding readers that “Jesus Christ is the only Savior.” Sounds a lot like the Louisville vandal.

In this age when hate speech is polarizing Americans and acts of right wing terrorism are increasing in the United States (while Islamic terrorism is decreasing in our country, according to the Global Terrorism Index) Christians would do well to be careful what we say and how we say it.

America’s youth (at least the ones who still attend church) are listening, and some take what they hear from the pulpit seriously. As American Christianity is declining and churches are emptying out, it would be wise for Christians to be more tolerant and accepting of religious minorities. We might be one soon.

Posted by Marshall Davis at 9:10 AM