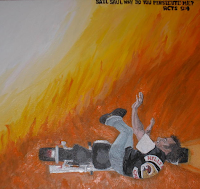 What happened on the first Easter? It is hard to know exactly what occurred when we only have some of the facts. The earliest list of Easter resurrection appearances is given by the apostle Paul, written down more than twenty years after Easter and about twenty years before any of the gospels were written. Paul writes:

This list is significant for what it omits as well as what it includes. There is no mention of the empty tomb, which plays such an important role in the gospels. Paul seems to know nothing about the resurrection appearances to Mary Magdalene at the garden tomb or the two disciples on the Emmaus Road, which are now the most beloved Easter stories.

Furthermore Paul includes resurrection appearances that are not recorded in the canonical gospels: singular appearances to Cephas (another name for Peter) and James (the brother of Jesus and head of the early Jerusalem church). Most amazing is the mention of group appearances to more than 500 “brothers” at once (how about “sisters”?) and another appearance to “all the apostles,” which presumably means the wider group of seventy apostles.

What I like the most is that Paul includes his own encounter with Christ on the Damascus Road as a resurrection appearance. His experience happened twenty years after Easter and hundreds of miles from Jerusalem. Yet he is adamant that his experience of the risen Christ was a resurrection appearance as genuine as those that happened on Easter Sunday, even though it is clearly a spiritual encounter and not a physical one.

Easter is not a matter of timing or geography. It is a matter of spiritual openness to the presence of the living Christ. Christ is risen! He lives! How do I know? As the Easter hymn says, “You ask me how I know he lives? He lives within my heart!”
Posted by Marshall Davis at 2:37 PM