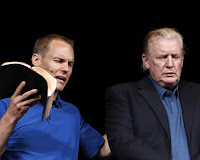 When evangelist Franklin Graham was in New Hampshire recently, he said that God had put a burden on his heart to pray for President Trump. A few days later he publicly called others to join him for “a special day of prayer for the president” on Sunday, June 2.

It was not long before hundreds of evangelical pastors and Christian leaders had signed on to make Sunday morning in their churches a time to pray for their president, whom they considered to be under spiritual attack.

It so happened that I was preaching that Sunday. Therefore I had an opportunity to publicly pray for our president. But I did not pray for Donald Trump in my pastoral prayer that Sunday, and no one in the congregation asked me to. I did not want to be seen as endorsing Graham’s agenda or be identified with the Religious Right.

The next day I learned that the president had stopped by the McLean Bible Church in the greater DC area to be prayed for on Sunday. The pastor, David Platt, (with only a half hour notice) did the right thing. He brought Donald Trump up front and prayed for him. It was a good prayer. Not political at all.

Yet this pastor was criticized right and left for his prayer. Anti-Trumpers in his congregation criticized him for publicly praying for him in worship. Trumpers criticized him for not being supportive enough of the president in his prayer. A couple of days later Platt apologized – or at least explained his action – for causing “hurt” to some of his congregants by praying. I feel for the guy. Who knew that praying could be so controversial?

He was only doing what the Scriptures instruct. “Therefore I exhort first of all that supplications, prayers, intercessions, and giving of thanks be made for all men, for kings and all who are in authority, that we may lead a quiet and peaceable life in all godliness and reverence. For this is good and acceptable in the sight of God our Savior, who desires all men to be saved and to come to the knowledge of the truth.” (I Timothy 2:1-4)

This pastor’s prayer followed that exhortation well. Yet he felt the need to justify his prayer to his congregation. American Christianity is in a sad state when a pastor is judged for praying for the president. Let me make it clear. I am not a Trump supporter. I do not agree with his policies. I did not vote for him, and will not vote for him next time around.

I do not think he is a moral person, and frankly I see no evidence that he is a Christian believer. But that has been true of many presidents. It certainly was true of the “kings and all who are in authority” when those words of First Timothy were written. The Roman emperor at the time was possibly Nero (the original antichrist) or Domitian (not a lot better)! Yet Christians were exhorted to pray for him.

Personally I think President Trump can use all the prayers he can get – from both the religious right, the religious left, and those of us in the religious middle. I wish now that I had prayed for our president last Sunday. I will pray for him next time I preach “that we may lead a quiet and peaceable life in all godliness and reverence. For this is good and acceptable in the sight of God our Savior…” In Jesus name I pray. Amen.

Posted by Marshall Davis at 4:47 PM