What the Wizard of Oz Taught Me 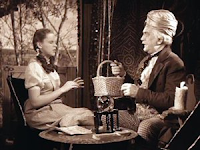 A quote came unbidden to my mind as I sat on my back porch on an early summer day, enjoying God’s creation. It was a line from the 1939 movie The Wizard of Oz, which my family used to watch religiously each year when I was growing up. The Wizard of Oz and The Ten Commandments were where I got most of my childhood theology. No wonder I was confused growing up!

I could only recall a fragment of it – something about searching my backyard - so I had to google it to get the wording right. Near the end of the film, the Tin Woodsman asks, “What have you learned, Dorothy?” She replies, “Well, I - I think that it - it wasn't enough to just want to see Uncle Henry and Auntie Em - and it's that - if I ever go looking for my heart's desire again, I won't look any further than my own backyard. Because if it isn't there, I never really lost it to begin with!”

Then comes that famous mantra - “There’s no place like home” - which tends to overshadow the preceding statement so that the most important part of Dorothy’s discovery is forgotten. Forget about Kansan domestic bliss for a moment, and contemplate this statement about our heart’s desire: “If it isn’t there, I never really lost it to begin with.”

I have often wondered if Judy Garland got the line wrong or if it was meant to be profound. I know it is not in L. Frank Baum's book The Wonderful Wizard of Oz, upon which the film was based. Either way, as it stands now, it has the qualities of a Zen koan. Untangling the double negative to figure out what the line really means isn’t the point. It points us to what isn’t lost.

From a spiritual point of view, what is not lost is the presence of God with us. It was never really lost to begin with. God is just as present in the wilderness east of Eden as in the Garden of Eden. How could it be otherwise? God is by definition omnipresent! But we have been conditioned to think that we are lost. We have lost God or God has lost us. In any case we are lost and far from home.

That has given opportunity to all sorts of wizards and Professor Marvels with their crystal balls, con games and offers of salvation – both religious and secular. We look everywhere on earth and over the rainbow for what we have lost. But the truth is that – like Dorothy – we just need to wake up. To find our Heart’s Desire we need look no further than our own backyard. Because if it isn’t there, we never really lost it to begin with!
Posted by Marshall Davis at 8:02 AM