The Gender of God 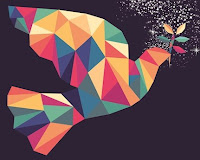 New words are added to the English language every year. To reflect our constantly changing vocabulary, 530 new words were added to the Merriam-Webster dictionary last year. Among the new words is the use of the pronoun “they” as singular. The reason for this change is the increased cultural acceptance of people whose gender identity is nonbinary.

According to Merriam-Webster, it is now proper to use they “as a pronoun of choice for someone who doesn’t identify as either male or female…. The new use of they is direct, and it is for a person whose gender is known, but who does not identify as male or female. If I were introducing a friend who preferred to use the pronoun they, I would say, ‘This is my friend, Jay. I met them at work.’”

This addition to the English lexicon unexpectedly gives insight into the gender of the Holy Spirit. Many people refer to the Holy Spirit as “it.” I am uncomfortable with this designation for the third Person of the Trinity. It reduces the Holy Spirit to a power or energy, like the impersonal Force of Star Wars. For me, it also conjures uncomfortable images of the strange relative of the Adamm’s family, Cousin Itt.

The Scriptures are not of much assistance in narrowing down the gender identity of the Holy Spirit. The Greek word for Spirit used in the New Testament is neuter and is referred to with the neuter pronoun. But when Jesus refers to the Holy Spirit as the Counselor or Comforter (which are masculine words in Greek) he uses a masculine pronoun.

In the Old Testament, the Hebrew word for spirit is feminine. There is a lengthy passage in Proverbs that personifies the Spirit as a woman named Wisdom (Sophia in the Greek translation.) Wisdom, in both Hebrew and Greek, is a feminine word. So according to the Scriptures, the Spirit is neuter, masculine, and feminine. Therefore the new use of the singular pronoun “they” is a perfect fit for understanding the Holy Spirit! The Spirit is nonbinary. Divine Reality is they.

This is further corroborated by the fact that the Hebrew word for God (elohim) is plural, probably reflecting an ancient Semitic polytheism. The many gods were eventually understood as one God. In the creation story in Genesis, God says, “let us make man in our image, after our likeness.” This is sometimes called the “royal we” as when the British monarch refers to herself with the royal plural, as in the sentence “we are not amused.” In Christian theology, this divine plurality became the Trinity: one God, three persons.

A nonbinary understanding of the Holy Spirit opens us to a nondualistic experience of God. God is more than we can think or imagine. Thinking of God as male – or for that matter female – is to anthropomorphize God. It is to remake God in our own image. The ancient Greek philosopher Xenophanes observed:

“The Ethiops say that their gods are flat-nosed and black, while the Thracians say that theirs have blue eyes and red hair. Yet if cattle or horses or lions had hands and could draw, and could sculpt like men, then the horses would draw their gods like horses, and cattle like cattle; and each they would shape bodies of gods in the likeness, each kind, of their own.”

An American example is Sallman’s ubiquitous portrait “Head of Christ,” which pictures a fair-haired, Caucasian Jesus. It is still found hanging on the walls of many American churches today.

God is nonbinary. In spite of most Christians’ natural tendency (me included) to refer to God with a masculine pronoun, God is not male or female. As Paul says clearly, “There is neither Jew nor Gentile, neither slave nor free, nor is there male and female, for you are all one in Christ Jesus.” When we see God in this nondual way, then it has the added benefit of seeing all persons, regardless of their gender identity or sexual orientation, as being created in the image of God. Who is the Holy Spirit? They is the Holy Spirit!
Posted by Marshall Davis at 2:09 PM