The Scent of Dinosaur Trees 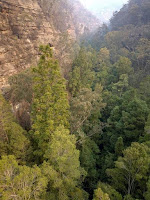 A story in the news recently captured my attention and will not let me go. It is the successful attempt by Australian firefighters to save the last remaining stand of Wollemi Pines, living fossils popularly known as dinosaur trees.  Deep in a gorge in the Blue Mountains of New South Wales, there lies a grove of less than 200 prehistoric trees. It is the only place on earth that they are known to grow in the wild.

Even though they are called Wollemi Pines, they are not a true pine (genus Pinus) nor a member of the pine family (Pinaceae). Instead they are in the family Araucariaceae, coniferous trees that thrived during the Jurassic and Cretaceous periods. Now this tree is found in only one place on earth. It was only in 1994 that they were discovered. Before then they were thought to be extinct, known only from fossils that dated as far back as 200 million years ago.

Just to know there are trees living now that existed when the dinosaurs ruled the earth excites the imagination.  I feel as if a chapter of Hilton’s Lost Horizon has come to life. As if suddenly Shangri-La has been located. It feels like a little patch of the Garden of Eden has been discovered on earth. I almost expect to hear tales of cherubim with flaming swords guarding the entrance to the valley where they dwell. The fact that their exact location has been kept secret from the public makes them even more fascinating.

Nearly every culture and religion has a myth of a primordial paradise, a Garden of the gods, a Golden Age that was somehow spoiled or lost. These tales are not to be taken literally, even though fundamentalist members of each faith do exactly that. These stories communicate something about our human condition, not human history.

They speak of a stage of innocence we had in childhood, before we became conscious of good and evil, death and suffering. They reveal childlike insight into the nature of the human heart, which in its natural state can perceive the unitive nature of the universe. Eden is not located in the Middle East. It is in the center of the human heart, the inner recesses of the soul. Call this the Spirit if you wish. Or call this God. Call it Self or Non-Self or any other religious or nonreligious term that works for you.

It is where we originated from and what we yearn for. It is ageless, like the dinosaur trees. A million years is a blink of an eye in this Garden. It is the Alpha and Omega, our beginning and our end … and our present. We come from there and will return to there. In reality we never really left, in spite of religious strategies outlining rigorous paths of return, liberation and redemption.

At those times when our souls are open to what lies beyond our little lives, we can smell the Wollemi Pines amidst the obfuscating smoke of this world. Caught up in the fragrance, we glimpse the reality that we are in the Garden here and now. That is why I love the dinosaur trees. Their scent reminds me of home.
Posted by Marshall Davis at 9:16 AM