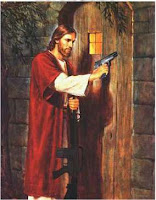 It must be the season of the year. Last year at this time an Assembly of God pastor in Louisville, Kentucky sponsored a "Bring Your Gun to Church" Sunday in his congregation. He preached a sermon on "God, Guns, Gospel and Geometry" followed by a $1 raffle of a handgun, firearms safety lessons and a picnic. This would never happen in a Baptist church! Baptists would never allow the raffle.

This year Louisiana is legalizing the marriage of guns and religion. Louisiana's House of Representatives voted overwhelmingly on May 12 to pass a bill that would allow concealed handguns to be carried inside houses of worship. It is in response to the rash of shootings that have occurred in churches in recent years. Pastors and laypeople have been gunned down as they worshipped. Christians want to protect themselves - hence the godly guns.

The only thing I am more afraid of than guns in the hands of the government is guns in the hands of religions. I know too much religious history to think that this trend could turn out well. Tony Campolo writes, "Mixing the church and state is like mixing ice cream with manure. It may not do much to the manure, but it sure messes up the ice cream." I would say the same thing about church and guns.

No matter how much I read the gospels, I can't make Jesus into a gun-toting member of the NRA. He clearly did not side with the Jewish insurgency of his day that was inciting violent revolution against the occupying armies of Rome. Neither did he side with Jews who accommodated to Roman oppression. He did not even resist evil by organizing nonviolent resistance to unfair government taxation, like Gandhi did in India.

When the authorities came to arrest him, Jesus famously told his top lieutenant Peter to holster his weapon, saying, "He who lives by the sword will perish by the sword." As Pilate pronounced the sentence of capital punishment Jesus said, "My kingdom is not of this world. If my kingdom were of this world, my servants would fight, so that I should not be delivered to the Jews; but now my kingdom is not from here."

For three hundred years Christians developed the reputation of being willing to die rather kill their enemies. It was a powerful testimony that won over the hearts of the populace and conquered the empire for the new faith. Then the emperor Constantine converted and led his armies into battle under the banner of the cross. That was the end of Christ's gospel, and the beginning of the religion we call Christianity.

So I guess I should not be surprised that Christianity is now introducing "Bring Your Gun to Church" Sundays. Constantine would be proud. The question now becomes, "What would Jesus pack?"
Posted by Marshall Davis at 8:29 AM