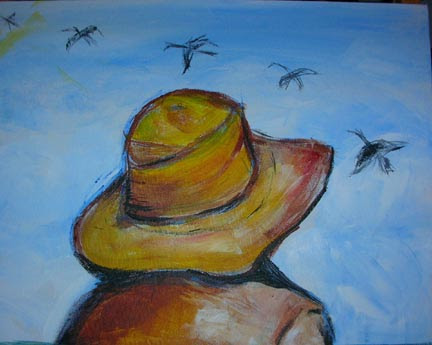 Jesus was neither a philosopher nor a theologian. He was not an academic professor or even a trained rabbi. Unlike the apostle Paul, Jesus could not point to a famous mentor like Rabbi Gamaliel. Jesus was nobody from nowhere.

Furthermore his teaching style was like no one else's. He did not quote legal precedents from other rabbis. He talked directly to people's hearts. People were astonished at Jesus' teaching because he taught with authority, unlike the scribes and Pharisees.

Jesus spoke in parables. "Jesus spoke to the multitude in parables; and without a parable He did not speak to them." Parables were not unknown before Jesus, but Jesus used them differently. His stories were not allegories or metaphors. They were pointers.
Jesus said to his disciples, "To you it has been given to know the mysteries of the kingdom of God, but to the rest it is given in parables, that 'Seeing they may not see, and hearing they may not understand.'"

Jesus' parables appear to function more like Zen koans than rabbinic allegories. They were meant to point to "the mysteries of the kingdom of God," to use Jesus' words. They were not meant to help people to see, but to reveal what they could not see or understand.

Jesus never taught that he was the Christ, yet God revealed this truth to Peter. "You are the Christ," said Peter. Jesus replied, "Blessed are you, Simon Bar-Jonah, for flesh and blood has not revealed this to you, but My Father who is in heaven."

I have heard - and preached - many sermons on the parables of Jesus. Mostly they missed the point. Parables are not intended to be exegeted and exposited. They are meant to point beyond themselves to the Kingdom of God.

As Jesus said, "Hearing you will hear and shall not understand, and seeing you will see and not perceive."  But then he added, "But blessed are your eyes for they see, and your ears for they hear."

"The kingdom of God is as if a man should scatter seed on the ground, and should sleep by night and rise by day, and the seed should sprout and grow, he himself does not know how." He who has ears to hear, let him hear!

Posted by Marshall Davis at 8:40 AM