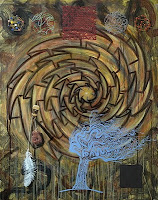 These three simple words, "Resist not evil," are the most difficult of all the Master's teachings. I have never met anyone who has fully accepted them. Even the modern saints of nonviolence - Mahatma Gandhi and Martin Luther King, Jr. - rejected the teaching. They practiced nonviolent resistance to evil as a political strategy, not nonresistance to evil as a spiritual discipline.

I am not judging these two great men; I made the same choice. I first heard these words when I was 19 years old and struggling with the morality of the Vietnam War. Uncle Sam was calling me to fight, and I was forced to examine my beliefs about the morality of the war. I read Gandhi and King.

It was through Gandhi that I first heard these words of Jesus. "You have heard that it was said, 'An eye for an eye and a tooth for a tooth.' But I tell you not to resist an evil person. But whoever slaps you on your right cheek, turn the other to him also." I had never heard them in church, but this Hindu introduced me to them.

Like everyone else I found a way to reject the ancient wisdom. I explained them away in order to ensure my self-survival. The literal meaning was too radical to consider seriously. Only recently, thirty-five years after that war ended, am I starting to comprehend the profundity of these words.

They mean to accept things as they are. That is why they are so offensive. It feels like surrender to evil. It sounds like fatalism. There is a lot of evil in the world. If I do not resist it, then evil will win. Then where would we be?

But Jesus is not advocating moral surrender. He is not telling us to cooperate with evil, condone evil, or submit to evil. He is asking us to think outside the box. There is very little of that happening these days - or any days. We always think within the box of opposites: right and wrong, true and false, liberal and conservative, Republican and Democrat, freedom and oppression, good and evil. We pick a side, hoping to choose the right side.

Jesus is pointing us to another way. Let things be as they are. Do not resist the evil. Without good to resist, evil cannot exist. Only that which you resist persists. Evil only exists in opposition to good. They are two sides of the same coin. If you pick up the good side of the coin, you will get the evil side also. You can't have one without the other.

Nonresistance to evil means to refuse to fall into the trap of Adam and Eve. Refuse the temptation to eat of the Tree of the Knowledge of Good and Evil. Instead choose faith. Choose God. Walk by faith and not by sight.  Be active, not reactive - and certainly not passive!

To "resist not evil" is to trust that God is working all things out for Good. Not the little good that resists evil, but the Good that is so big that it incorporates evil into the divine plan.  As the Desiderata says, "Whether or not it is clear to you, no doubt the universe is unfolding as it should. Therefore be at peace with God...."
______________________
Art is "Resistance Non-Resistance" by Aldo Saurini, acrylic on canvas, 2009
Posted by Marshall Davis at 8:17 AM