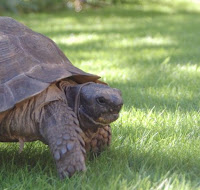 Back in 2005 I spent a month as a visiting scholar at Oxford University in England. It was made possible through an arrangement between Oxford’s Regent’s Park College and Georgetown College in Kentucky. I was made aware of this opportunity through a seminary friend of mine, Dwight Moody, who was Dean of the Chapel at the time. They made a flat available at Regent’s Park to Baptist pastors for one month at a time. It was a wonderful experience, which my wife and I still talk about.

At Regent’s Park lived Oxford’s oldest resident, a tortoise – now 115 years old - who resided in the quadrangle of the college. I wondered what it signified about a Baptist institution to have an ancient tortoise as a mascot. I decided that it was a tacit admission that Christians – and Baptists in particular – are notoriously slow to change.

The name of the tortoise was Emanuel. Not any longer. A few years ago it was discovered that he was actually a she, and was renamed Emmanuelle. Well, at least English Baptists are sensitive to issues of gender identity.

I often thought how wonderful it is that a Christian college, which prepares scholars for ministry, had a mascot whose name means “God with Us,” even if it was a tortoise. The constant presence of Emanuel/Emmanuelle in the courtyard is a reminder of the omnipresence of God.

The name Emanuel (also spelled Emmanuel and Immanuel) is from one of the most famous prophecies concerning Jesus in the Christmas story. Matthew’s gospel says, “All this took place to fulfill what the Lord had said through the prophet: ‘The virgin will conceive and give birth to a son, and they will call him Immanuel,’ which means ‘God with us.’” (Matthew 1:22-23)

This is one of the most meaningful titles for Christ in the Bible. God is with us. This name, which prophesied the birth of Christ, echoes the final words spoken by Christ, “I will be with you always, even to the end of the age.” (Matthew 28:28) That is what Christ and Christmas are about – the presence of God with us today.

Yes, Christmas is about the birth of Jesus, but if that is all it is, it is confined to the ancient past. Christmas is also about God with us here and now.  Not tucked away in some distant heaven. Not confined to the distant past. God is here now. The only way we become aware of God is if we are also here now. Not pining for a golden age when Mary’s son walked the earth or yearning for a future coming of the Messiah. God here now.

There is one more thing I have to say about the tortoise. While we were in Oxford, Emanuel disappeared. One day he was lollygagging around the quad, and the next he was nowhere to be seen. I missed him, and asked where he went. I was told that he was hibernating.

There was no place for a large reptile to ride out the winter in the courtyard, so they put him in a box to sleep away the cold months. Hmmm. There must be some spiritual significance to this. God in a box? The hidden God?  Oh, well, Emanuel is still with us, even if we cannot see her.

Posted by Marshall Davis at 8:59 AM