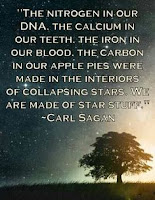 Stars are ubiquitous this time of year. Even nonreligious people embrace the star as symbolic of the holiday season. People who would never display a crèche or a wear a cross will acknowledge the star as a meaningful symbol.

We place stars atop “holiday trees” in Rockefeller Center and our nation’s capital, and no one calls the ACLU to complain of crossing the line between church and state. The star is a universal symbol for something that transcends religions and cultures. We all agree on stars.

In the Christian story, the Star of Bethlehem accompanies Jesus’ birth. The nativity story of Matthew’s Gospel tells of Magi from the East following a star. Despite two thousand years of trying, no one has satisfactorily identified the astronomical phenomenon known as the star of Bethlehem. But that is alright. It is the story that counts. Stories tell truths even when the details cannot be corroborated by science or history.

In this story the star guides the stargazers to Truth in the form of a child. They bow before the Starchild and lay precious gifts at his feet. The story reminds us that there is something older and greater than ourselves. Even science confirms this.

An interesting scientific fact is that the human body is made of material originally formed within stars. Carl Sagan famously said in the original television series Cosmos, “The nitrogen in our DNA, the calcium in our teeth, the iron in our blood, the carbon in our apple pies were made in the interiors of collapsing stars. We are made of starstuff.”

Every element in the universe (except for hydrogen, helium and lithium, which were formed by the Big Bang) was formed in the nuclear furnaces called stars. Most of the elements in our bodies have been recycled for billions of years through several stars before they became part of our earthly bodies.

We are ancient. The hydrogen in our bodies dates from the moment of creation 14 billion years ago. All other elements in the universe are the byproduct of stars that died in explosions called supernovae. We are stardust, as Joni Mitchell sang in Woodstock … or nuclear waste, depending on your point of view. I prefer stardust.

The Magi were led to a child who later proclaimed himself as eternal. “Before Abraham was, I am,” he said. They see in this child the Ancient One. In worship they return their gold to its source. In so doing they return to their own source. The journey to Bethlehem is a spiritual pilgrimage.

Stars are our mothers. They are the matrices of our physical existence. They also represent our spiritual source. We are children of the heavens. We are born of the universe, and one day our bodies will return to the universe to be recycled. Likewise the Life within us, which we call our soul, returns to the Life that gave us birth.

Somehow we intuitively recognize the stars as our home. As Sagan said, “Some part of our being knows this is where we came from. We long to return, and we can because the cosmos is also within us. We’re made of star stuff. We are a way for the cosmos to know itself.”

In this season of worship and awe, we bow before this Reality. Anyone who has lain on their back in the summer and gazed into the vastness of the Milky Way on clear night knows the depth of this reality. It takes our breath away. The only proper response is awe. This is the heart of Christmas. This is the Birth we celebrate.

Posted by Marshall Davis at 8:25 AM